My company, AirBelt Systems, was the first company in the world to successfully demonstrate use of safe, inert helium gas and the Intelliflow throttling valve to solve the industry’s killer airbag problems of the 1990s.

Deaths by airbags were caused years ago by the auto industry’s irresponsible adoption and use of toxic gases (from solid-rocket fuels like Sodium Azide) to combust and inflate airbags that ended up burning, concussing, injuring and even decapitating(!) those for whom airbags were supposed to protect.

After literally 100s of millions of explosive hot-gas inflating airbags have been installed over the last 20 years, the auto industry is now adopting use of the very same cold gas inflation methods that my partners and I pioneered, tested and proved safe in 1997 with our cold gas Intelliflow Airbag Inflator:

Using the skills I refined at Aura Systems, managing the product development and market launches of the AuraSound Speakers, Bass Shakers, Interactor, and Satellite Movie Distribution Network projects, I started-up AirBelt Systems in 1995 for the unrealistic expectation of offering “retrofit” rear passenger airbags for installation in cars that had no rear airbags but wanted airbag “protection.”

I soon discovered that a radical retrofit airbag like that would never get approved for sale in cars and would have huge insurance liabilities that would break me – so, as a lesson to all Entrepreneurs, we rolled with the punches and developed our Plan B —  that actually worked. 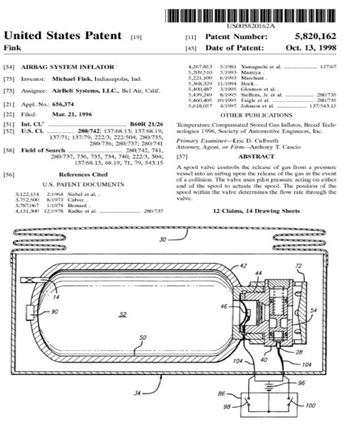 To the surprise of everyone in Detroit, my private company, AirBelt Systems, LLC, solved the Airbag Crisis of 1996/1997 with our IntelliFlow airbag gas-flow throttling device.

Our efficient spool-valve design cost $10.00 to manufacture and was proven to be the most effective solution to the problem of airbag injuries by NHTSA-certified Sled Tests.

Unlike any other airbag system that could only protect a heavy men, but fail to protect lighter-weight children and infants– our simple $10-dollar IntelliFlow airbag throttle  safely passed the NHTSA Crash Tests for all weight classes— for front- and rear-facing infant car seats, toddlers, women and heavy men passengers — which no other airbag innovation had ever demonstrated and accomplished before (or after) all-in-one low-cost device such as our!

The Intelliflow airbag system was so novel and inventive, that it received a U.S. Patent on October 13, 1998 under the accelerated patent process because of its very real and much-needed societal safety benefits.

We had innovated an entirely different, but highly-effective and very low-cost pressure-throttling spool-valve that could literally save 100s of lives every year by solving the highest-profile national vehicle safety problem facing the automotive industry.

TRW, the largest supplier of airbags to the Auto Industry at the time, negotiated  alucrative deal with AirBelt Systems in the Summer of 1997 because the IntelliFlow Airbag Valve proved itself over and over again in all NHTSA certified crash-tests and regulatory filings for which TRW had participated or observed.

AirBelt solved the underlying problem of high pressure airbag deployments by making every airbag work just as safely and effectively for lightweight children, as for heavy weight men.  This was the Holy Grail for airbags.  And this “outsider” from Beverly Hills, California, and our team, actually succeeded technologically, where billion dollar competitors like TRW, Morton and Autoliv had failed. 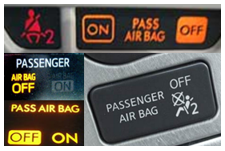 Yet, still the cold-blooded politics and the arrogance of Detroit OEM suppliers doomed our proprietary $10.00 Intelliflow Airbag Valve (that cushions airbag deployment safe for children as well as adults) in favor of a worse solution that offered more profits: the least safe and least effective $100.00 Seat Sensor.

Promoted at the same time by TRW, the Seat Sensor turns-off the airbag if the seated passenger weighs  less than 70-pounds (even in a 60mph crash when the airbag is needed.

The reality was that the airbag industry was more in fear of their airbags killing passengers, than protecting passengers from the crashes themselves.

Turning-off the passenger airbag so the airbag doesn’t kill a child or elderly person in the front seat, is not a solution for passenger safety in 40+mph crashes!

Turning-off  the passenger airbag is solely a remedy of liability to indemnify the airbag manufacturers and carmakers for killing you with the airbag, instead of the crash.

Turning-off the passenger airbag reduces passenger safety, because it leaves every passenger who weighs less than 70-pounds unprotected from the destructive G-forces of a high-speed crash  – when the airbag is needed the most.

But instead of “doing the right thing” the National Highway and Transportation SAFETY Administration (NHTSA) allowed the industry to turn off the airbags to protect corporate liability over passenger safety by installing a “warning light” and turning off the passenger airbag –even in high speed crashes when it is most needed!

In many ways, this NHTSA decision is no different than the Flint, Michigan toxic water crisis, where local, state and federal EPA Regulators and government officials were supposed to protect the residents of Flint — but instead they protected their own bad-science and bad decision-making.

So it is with NHTSA’s decision 15 years ago that still haunts every new car on the road today: As of 2015, the Occupant Classification System (OCS) of seat and floor sensors –that determines the weight of a passenger and then turns-off the passenger airbags (when they are needed the most in a high speed crash) – is still being installed in every new car today. Since 2001, there are now over 200-million American cars and light trucks on the road today with passenger airbags that turn-off when you need them the most.

And to make matters even more absurd: millions of Seat Sensors are being recalled now.

I tried to help with our self-throttling cold gas Intelliflow Airbag inflator – but the System, at the time, was totally skewed against common-sense solutions by Detroit outsiders like us, who actually cared about airbag safety.

During 1996 and 1997, automotive air-bag deployments in low-speed collisions caused the deaths of 49 children and in the serious injuries of 19 children in the United States.

As Chairman and CEO of AirBelt Systems, I personally financed, named, and developed, with Chuck Fenton and Michael Fink, the IntelliFlow custom Spool-Valve that could regulate and throttle air bag inflation to prevent the kind of literal decapitations-by-airbag that were threatening America’s youngest passengers.

From 1996 onward, death-by-airbag became front-page news.  Passengers in some of America’s most popular family cars and minivans started to fear the harmful effects of the airbag on them, more than the severity of the crash itself!

At great risk, at great cost, consuming all of my time and with no guarantee of success that we could make our technology even work — I invested over a million dollars of my family’s funds into my crazy fantasy world idea where my two partners and I could solve the airbag problem, when 100s of paid experts elsewhere had not!

It’s true.  My partners and I literally solved the Airbag problem of the 1990’s – and every step of the way, the politics of the Detroit auto industry did everything it  could to ignore us, and then try to derail us, in order to stop our $10.00 Spool-Valve from hurting our Competitors’ sales of 10X more expensive “seat-sensor” solutions to the problem that they were trying to sell to Congress and the automakers.

It was only because I had the money, that I could afford to hire a former Congressman to introduce me to the National Highway Transportation and Safety Administration (NHTSA) Administrator Dr. Ricardo Martinez, and make him an offer that he could not refuse:

This way, if we are as successful as we expect to be, we could then use the success of this NHTSA Crash Test to show the public, show Detroit and show the OEM airbag suppliers that the IntelliFlow technology works and indeed solved the problem that was now plaguing the car companies and the NHTSA Administrator in the press.

And in fact, NHTSA’s own certified Sled Tests confirmed that the IntelliFlow airbag throttling device successfully and safely protected all sizes and weight classes of passengers from the kind of injuries that smaller and lighter passengers still suffer today from airbags. (AirBelt)

Unfortunately for us, there were some terms of agreement from which TRW would not budge –and one of them was the insistence that we would only be paid the Buck-and-Airbag Royalty if we received an official U.S. Patent (we did the next year) and that the Agreement include a Non-Compete Clause to prevent us from working on this technology anymore without them.

After we signed the deal, my partners moved to Mesa, Arizona where TRW airbags were built, and worked day-to-day for a year with TRW engineers, who seemed to do everything possible to delay our progress and testing, so that we would fail their tests that no other airbag inflators could pass; doing everything to make the technology look bad.

Ultimately, TRW officially scrapped our $10 device that solved the airbag problem and would hereafter prevent passenger deaths — in favor of their $100 TRW seat-sensors.

Our $10.00 IntelliFlow airbag throttling-valve would have saved passengers from being hurt by the airbag.   But that was not to be.  Instead  Congress literally passed a law to save the airbag companies and carmakers from having to fix the problem: by installing a “warning light” and turning off the airbag itself –even in high speed crashes when it is most needed!

Using the non-compete clause against us, TRW then sat on our technology for years while they prevented us from selling it elsewhere. Our only solace is that they paid us very well.

But what was especially galling is the fact that 6-months after they shelved our technology in favor of their seat-sensors, the TRW execs that condemned tens of millions of America’s front-seat passengers to the risk of airbag non-deployment (and even death) left TRW for better-paying jobs, getting promotions according to Corporate America’s Peter Principle.

Then, adding more insult to injury – we were sued by a competitor who claimed we were infringing or copying their microdet shaped-charge burst-disc opening technology when, in reality, our spool-valve gas-throttling invention does not open a burst-disc, and doesn’t care at all what kind of burst disk opening method is used.

But that didn’t matter to the Court System.  You can sue anyone for anything – and it will take months and months and thousands and thousand of dollars in court costs, discovery and attorney fees before the Truth will come out.  This failed airbag inventor needed someone else to blame for his own company’s failures, and to try to take the credit for my company’s IntelliFlow innovation — that had nothing to do with the way to open up a compressed gas bottle but everything to do with the way to throttle high-pressure gas after the bottle is opened to cushion an opening airbag.

Ultimately, after spending tens of thousands of dollars in attorney fees and court costs, we prevailed against this nuisance suit; yet by this time, the market for our breakthrough airbag technology had passed us by.

The technology worked but the system failed.  And every driver with a passenger-seat airbag on-off switch is paying the price to this day.