Yes after almost 20 years of anonymity, it can now be revealed that I, Larry Shultz, was the father of THE INTERACTOR Virtual Reality Game Wear sold at Toys R Us and other mass merchant stores (supported by high octane Saturday Morning Kids and MTV commercials targeting America’s gamers and their Parents) for the Christmas 1994 Toy Season.

ORIGIN STORY OF THE INTERACTOR

While his brothers, Eric and Brian, were still in diapers, my oldest son, Alex, was 8-years old and playing Mario Brothers video games with his mom and me when the Interactor was conceived.

Turning up the volume on the TV to hear the video game sound effects better, I fantasized about what it would be like if you could “feel” the video game and not just hear it.  Feel the punches and explosions, like the 1970’s movie theater Sensurround, but for Video Game systems.

That was the spark that spawned the Interactor.  And in 1993, I and a dedicated team at Aura Systems, Inc., led by myself with Cipora Lavut on the “look and feel” design and marketing side, and Jeff Bluen on the technical side, collectively  invented the Interactor Virtual Reality Vest for the only bass-enhanced video game-playing experience at the time.

The Interactor Vest was a wearable force-feedback device that used Aura’s patented electromagnetic actuator technology to convert bass sound waves into vibrations you can feel, like a video-game punch or kick, gunshot or explosion. The Interactor vest plugs into the audio output of a TV, computer or video game system and has controls that can allow for adjusting of the intensity of vibration and filtering out of high frequency sounds.

This was before Force-Feedback Video Game Controllers that we, stupidly, did not take to the next level beyond the Interactor Vest, the Interactor Pillow and its related Automotive and Home Theater Bass-Shaker applications.

From the Battlefield to the Toy Shelves

Aura Systems, Inc. (a public company of which I was a shareholder, a member of the board of directors and the Senior Vice President  in charge of Audio and Video Technologies) was looking to expand its business model beyond its usual Defense Department work by applying its electro-magnetics expertise financed by the military to consumer electronics products, like high force actuated speakers and other products that consumers at large would want to buy from Aura, to improve home entertainment experience of the 1990s… 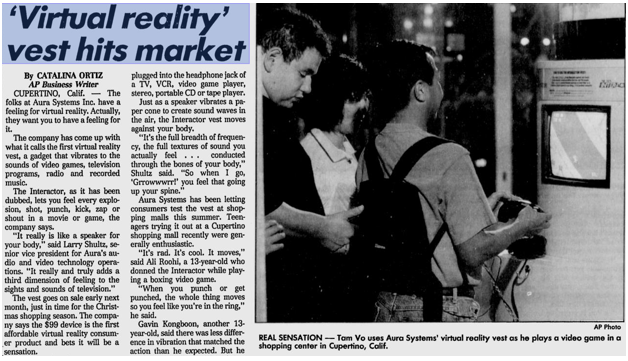 Soon after we started-up the AuraSound Speaker division and developed the Neo Radial Speaker line –  the executive decision was made and funds were allocated for an accelerated product development and consumer marketing timetable to sell Aura Interactors for Christmas 1994.

This meant that we needed to have more than 50,000 units manufactured, shipped and in chain store warehouses by the end of September 1994.

With deadlines hovering over us for every aspect of the design, manufacturing, sales and distribution of this consumer product — our learning curve was steep, and fortunately mistakes were few (or at least not totally destructive), as we worked hard to make our shipping deadline for the Christmas Season.

We had to develop the Interactor shape, choose its material “look and feel” and design its brand logo, box design, color scheme and associated artwork, fontwork, marketing slogans, print-ads – and then we even spent over $1-million with Asatsu BBDO ad-agency to produce and air Co-Op Advertising Supported TV commercials to cross-promote sales of the InterActor at Toys R Us and other local retail outlets.

At the same time that Cipora and I were developing all the marketing materials to meet the Christmas 1994 deadline, we just as importantly had to finalize the component design of the Interactor’s electronic components underneath all the packaging and hype.

We had to build ourselves the bass shakers that are assembled into the plastic casing and packaging that third-party sub-contractors undertook to deliver for a fixed per-Interactor unit price.  And then we had to spend weeks, if not months, trying to improve the efficiency of the system in order to reduce component requirements and lower product costs.  Which we did.

And though most business people would have bet against us because we had never produced a multi-million dollar technology development and co-op TV marketing campaign before – the truth turned out that we all worked well together, as a team, in those days at Aura. 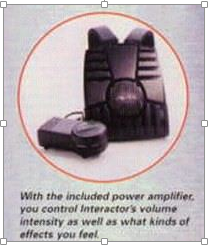 Our successful delivery of Interactor units and Radio and TV commercials running on-air, on-schedule, cross-promoting local Toys R Us stores to buy it at —  is the proof that we were capable and deserving of investor confidence in us to get the job done, no matter what it entails – because that is exactly what we did – get a working product into the stores on time.

It was a lot of pressure – but it was also lot of fun.  And the good news is that Toys R Us considered it a success – in less than one year, we had designed, prototyped, manufactured and shipped (if my memory serves correctly) over 89,000 Interactor units, at a wholesale price of $53 per unit with a suggested retail price of $89.95 (which was a little more than the cost of other Super Nintendo games).

If you judge us by our ability to conceive of a product and then ship it to Toys R Us in less than a year later for the upcoming Christmas Sales Season – then absolutely, our management style worked and our team succeeded in its goal to put finished, packaged Interactors on Toys R Us shelves for Christmas 1994, thank you.

I would later prove my ability again to put together the right team of people to accomplish a complicated goal – such as developing an airbag inflation throttling technology that could prevent the deaths and injuries revealed by the 1996 airbag crisis.

If imitation is the sincerest form of flattery, then what is especially fabulous to hear and see – is that our original Interactor creation gave birth to a Video Game Peripheral category of Virtual Reality Game Wear that was updated and improved upon by the future copycats:  the Space Vest of 2007, Tactile Gaming Vest of 2010 and new 2013 ARAIG.

Amazon.com sells TN Games 3rd Space Gaming Vest. As more and more videos on YouTube show, our collective efforts launching the Interactor product years ago must have engendered good feelings, because fans from the past and present are still posting videos and messages about the Interactor.

And today there is a market buying and re-selling them on Amazon.com, eBay.com and other online websites: Find it on Amazon – Aura Interactor

While the Interactor had a short life due to many corporate problems, the Bass Shaker technology built inside it, which enabled the efficient conversion of sound into vibration, lives on to this day, 20 years later – used by thousands of Automotive Sound and Home Theater “Sensurround” Applications.

Aura’s Interactor Cushion(TM) provides the pleasure of an added dimension of the full feeling of audio bass frequencies, without the need for high volume audio. The Cushion brings to the home an additional degree of involvement and reality to television and multimedia and stereo systems. This added participation is achieved by the same technology as Aura’s Bass Shaker(TM) and Interactor Vest(TM), used in the Luxor Hotel’s “Theater of Time” in Las Vegas and in automobiles and homes around the world.

Those days at Aura, working on so many different technologies and products at the same time, were some of the most important business experiences in my life.  And it was the lessons I learned managing people, that I would later draw upon to successfully develop the IntelliFlow airbag and Enhanced Oil Recovery technologies.