What most Americans don’t realize is that America may have all the oil it needs right here at home. And the best place to find new oil is in an old oil well — because for every one-barrel of oil pumped out of the ground using primary oil recovery methods, there remains approximately four-barrels of stranded-oil still left in the ground.

EOR (Enhanced Oil Recovery) is The Next Big Thing in the oil business because new EOR technologies can enable America to recover up to 70% of the stranded oil that remains in hundreds of thousands of America’s old and abandoned oil wells.

Over the last few years, my partners and I have worked diligently to commercialize two much-needed technologies for this burgeoning EOR business:

1.     a geothermal-powered pump that does not consume electricity (enabling marginally-producing water-cut wells to operate profitably without high monthly electric pumping bills that might otherwise force such wells to shut down for economic reasons) and

2.     a portable engine exhaust gas injection EOR system that promises to be more cost-effective than pure-CO2 EOR in extracting stranded oil from marginally-producing and abandoned oil fields whose permeable geological characteristics can best benefit from re-pressurizing the reservoir to re-mobilize the oil.

This capability of a low-cost portable, skid-mounted, N2+CO2 exhaust gas injection EOR system has been achieved by www.FossilBayEnergy.com.

Here’s why the promise of portable N2+CO2 EOR offers so much promise to increase American energy independence: There are approximately 500,000 actively producing oil wells in the U.S., of which 80% (~400,000) are classified as marginally-producing “stripper wells” that produce less than 10-barrels of oil per day. Today, these stripper wells produce in aggregate nearly 1-million barrels of oil per day, representing almost 20% of America’s daily oil production.

In fact, the DOE has estimated that the use of CO2-EOR could generate >240 billion barrels of recoverable oil: Likewise, BP’s head of technology says future oil supply will come from EOR, not new oil discoveries:

Just a few years ago, America imported over 10.1-million barrels of crude oil a day. Today, because of an increase in domestic oil production, we actually import 3-million barrels a day less oil. Soon, because of new Enhanced Oil Recovery (EOR) technologies, America may be able to replace the ~3.3-million barrels a day of foreign oil that we currently import from OPEC countries – which harms our economy by sending more than $115-billion a year in American fuel-dollars overseas to countries that threaten our national security interests 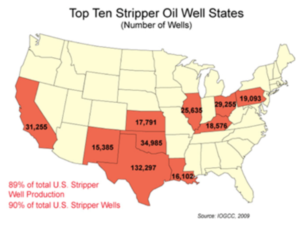 During primary recovery, when oil is discovered in a new reservoir, the natural pressure of the reservoir, or gravity, drive oil into the wellbore, combined with artificial lift techniques (such as pumps) which bring the oil to the surface. But only about 10 percent of a reservoir’s original oil in place is typically produced during primary recovery.

Secondary recovery techniques extend a field’s productive life by injecting water (“water-floods”) or natural gas to displace oil and push/drive it to a production wellbore, resulting in the recovery of an additional 20 percent of the original oil in place.

In order to recover 30 to 60 percent, or more, of the reservoir’s original oil in place a number of ‘tertiary’ recovery methods have been developed to mobilize crude oil trapped in rock formations and to re-pressurize the reservoir by replacing the volume of gas and oil extracted during primary and secondary water-flood production. Two major categories of such Tertiary EOR methods have been found to be commercially successful to varying degrees: 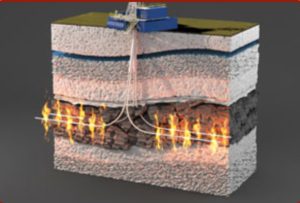 In the U.S., there are about 114 active commercial CO2 injection projects that together inject over 2 billion cubic feet of CO2 and produce over 300,000 barrels of oil per day, representing approximately 5% of current U.S. oil production. By 2035, the Energy Information Administration estimates that 25 percent of U.S. oil production will be produced through CO2 EOR.

CO2 gas floods, however, are restricted to fields where large quantities of CO2 can be supplied from natural sources or industrial sources, by pipeline. CO2 pipelines are costly, resulting in up-front capital expenses in the hundreds of millions, and billions, of dollars. As the map below shows, only certain areas of the USA are equipped with CO2 pipelines

Hello! I simply wish to give you a big thumbs up for your excellent information you have right here on this post. I will be returning to your web site for more soon.