On May 18, 1963, President John Fitzgerald Kennedy gave a speech commemorating the 90th Anniversary of Vanderbilt University that is as prescient and as relevant today as it was 50 years ago.  Notice how this speech again asks for Citizens to fulfill their obligations and responsibilities to the Country (a fitting follow-up to his “Ask Not What Your Country Can Do For You” Inauguration Speech).

Here we are in the 21st Century, and still Kennedy’s words ring true as ever.

“If the pursuit of learning is not defended by the educated citizen, it will not be defended at all. For there will always be those who scoff at intellectuals, who cry out against research, who seek to limit our educational system. Modern cynics and skeptics see no more reason for landing a man on the moon, which we shall do, than the cynics and skeptics of half a millennium ago saw for the discovery of this country. 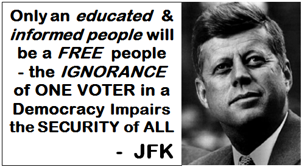 “But the educated citizen knows how much more there is to know. He knows that ‘knowledge is power’ more so today than ever before.

“He knows that only an educated and informed people will be a free people, that the ignorance of one voter in a democracy impairs the security of all.“

Kennedy knew these cynics and skeptics, purposefully or not, would impede American progress – and that the only democratic remedy to overcome these obstacles of ignorance would be to EDUCATE the Citizenry, so they become an Informed Electorate with the wisdom to decide the best way to fix something in America.

Today, with the political propaganda machines on various Cable TV News channels, Talk Radio Stations and the Political Blogosphere — politicians are increasingly emboldened to use their “bully pulpit” of Congressional Press Coverage,  TV News appearances and telephoned newspaper interviews to spread the Party-line “talking points” and encourage their constituents to ignore the facts that disprove their political theories, in favor of touting other “facts” that don’t contradict them.

This purposeful ignoring (ignorance) of, and Magician-like misdirection away from, factual Truth, reinforces one-sided and ill-informed opinions instead of truly being fair and balanced by presenting the contravening facts that some media outlets have purposely ignored (precisely because such facts will destroy the basis of their political arguments and create stronger doubts about the credibility of the narrative they are trying to sell to Voters). [Political Ignorance]

Over the years, politicians have created political narratives that were so effective and manipulating that Voters would unknowingly vote against their own personal financial self-interests, today, in exchange for a promise that will never come tomorrow.

While an informed electorate may be ideal, most voters don’t have the acumen, nor the time, nor the ability to search for the information they would need so as to become sufficiently informed about the Candidates running for Congress and the Election Issues that will most affect them and their families (as a result of government actions that will be voted on by the very Congressman and Senators whom the majority of the Congressional District Voters  deem to vote-for, as their Elected Representatives).

ClickVote provides Broadcast TV Station, Cable TV Channel, Radio Station and Internet audiences with a  Voter-Empowerment Widget/App that makes it easy for America’s 200-million eligible voters and 150-million registered Voters to SEE WHO’S RUNNING FOR OFFICE in one’s Voting District —  and to SEE WHERE THOSE CANDIDATES STAND ON THE ISSUES that matter the most to the Voters.

ClickVote’s high voter-engagement and citizen-empowerment website click-throughs (to the Candidate’s own official online and mobile webpages), plus the in-app Click-to-Call, Like Me on Facebook, Follow Me on Twitter and Donate to My Campaign voter-functionalities, will each earn high-CPM revenues and transaction-fees paid by the Candidates to ClickVote as reward for best directly connecting the Candidates to the Voters in their districts through the ClickVote UI/website/app.

The ClickVote UI/website/app provides over fifteen distinct functions and capabilities that every Voter and Candidate in the 21st Century should expect to have in a Citizen-Empowerment app – which is why TV, Radio and Internet/mobile audiences will be attracted to ClickVote in 2014, because:

“I know no safe depository of the ultimate powers of the society but the people themselves; and if we think them not enlightened enough to exercise their control with a wholesome discretion, the remedy is not to take it from them, but to inform their discretion by education.” — Thomas Jefferson

The www.ClickVote.com website makes it easy for today’s Voters to stay informed and participate in the democratic process of Voting by connecting the Candidates to constituent Voters on their Smartphones, Tablets, Laptop and Desktop devices.