Int’l Telesystems, TickeTV and the POTUS 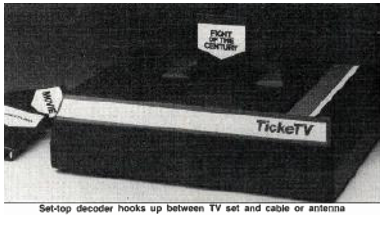 Since necessity is the mother of Invention, in 1982 I started to think about the 30-million cable customers whose cable systems were still “dumb” and non-addressable, like my Theta/Century/Adelphia/Time Warner Cable/now-Charter cable system of the day.  They could not in the 1980s and 1990s cost-effectively control the scrambling and de-scrambling of individual cable channels to secure a Pay Per View Event broadcast into an individual customer home.

So, I created the “Electronic Ticket”.

I thought that I could improve upon that business model by bringing Event Programming to the 30+ non-addressable cable TV market:  using a domino-sized battery-powered Electronic Ticket (notch filter) in the home to “decode” the scrambled cable-signals to enable authorized subscribers to watch pay-per-view programs on cable.

In 1986, after I created the 1-800-DECODE-1 telephone service to leverage my entrance into the Satellite TV decoding business (which phone number we licensed to Radio Shack for DirecTV) – I formed International TeleSystems, Inc. with movie producer and industrialist Stephen Dart.

Instead of concentrating on the 30-million non-addressable Cable TV homes for PPV pay-per-view movie and event programming, the partners of International TeleSystems concentrated on low-cost international VHF and UHF over-the-air broadcasters seeking to configure their networks for generating Pay-TV  revenues.

As CEO of International TeleSystems, Stephen Dart built an incredible board of directors for the company and our efforts overseas: 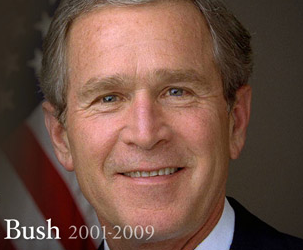 And yes, the George Bush listed on Page 97 in this .pdf of the May 1989 issue of Broadcasting Magazine is the George W. Bush who, years later, was elected Governor of Texas and the 43rd President of United States (on my first board of directors).

With our re-focus on TickeTV, International TeleSystems hired Bruno Rist, who, with Adrian Devries, improved upon the original notch-filter technology, for which new patents were granted.

In 1988 and 1989 TeleSystems formed a partnership with Television New Zealand to develop the TickeTV system for New Zealand broadcasters to bring Pay-TV and pay-per-view to the large number of New Zealand homes not served by cable TV.

At a time before the historical record of the Internet – we made TV history by scrambling the New Zealand TV station and decoding it miles away, over the air, using the TickeTV interfering-carrier pay-TV technology.

With our New Zealand demonstration in development, Steve Dart and I went to London for meetings with top government ministers in the Margaret Thatcher administration.   With the political connections we had, we were given VIP entry to the iconic Number 10 Downing Street building.  In England, Number 10 Downing Street is the equivalent of America’s White House: where Prime Minister Margaret Thatcher lived and worked with her cabinet ministers.

What seemed crazy to me at the time, is that I literally wheeled around a large foot-locker, filled with electronic scrambling and TV display equipment that I used to demonstrate our TickeTV scrambling and unscrambling system in real-time to prospective customers.

Can you imagine, after suffering IRA bombings and future mortar attacks, that the guards at the outside entrance to Number 10 Downing Street, and the guards inside, failed to search my foot-locker for a potential bomb!  If anything looked suspicious, it should have been all the electronic, equipment, blinking lights and wires in my footlocker  – but then I guess we were on the “Trusted” Do-Not-Search list!

We did not meet Mrs. Thatcher, but we did meet her assistants and chief technology advisers.  The Thatcher government was interested in scrambling the BBC during the late night when it was off-air, and after what we were doing in New Zealand, the British government seemed interested in our TickeTV scrambling technology.

But ultimately, England went with its own homegrown scrambling technology for their overnight BBC Select service — and in 1990 I left International TeleSystems to follow my dream of building a Mag-Lev Toy Train in partnership with AuraSystems, Inc.   At the time, I had no idea it would lead to my developing the Aura Sound, Bass Shaker and Aura Interactor technologies).

While we may have lost the cable wars, the one opportunity I brought to TeleSystems that has endured was our corporate investment in and control of a satellite-TV installation network, called Digitron (www.Digitron.net) that survives to this day, with over 2,700 affiliates and 15,000 engineers in its consulting network.